Please take time to view and enjoy them.  Next Thursday, December 16th, a court will decide the fate of this historical landmark that anchors the landscape of my neighborhood in Midtown Memphis,TN.  The legacy of The Union Avenue United Methodist Church will be put to death if CVS is allowed to purchase and demolish this building.  Local organizations have expressed serious interests.  I hope they will be given the opportunity to purchase it and the honor of restoring it to a place of worship for the Midtown community.

***These photos were taken by TN Representative Steve Cohen, when he was 12 yrs. old.  It was the only day in which Kennedy and Nixon were campaigning in the same city.

(The building in the background is the Union Avenue Methodist Church.)
Posted by Leigh Lucas Gilliland at 11:40 PM No comments:


Random act of culture...here's your opportunity!

Architecture is to make us know and remember who we are.  – Sir Geoffrey Jellicoe

Architecture is a continuing dialogue between generations, which creates an environment across time. – Vincent Scully

Architecture is space structured to serve man and to move him. - Etienne Gaboury

The job of buildings is to improve human relations: architecture must ease them, not make them worse. – Ralph Erskine

Historical structures, especially sanctuaries of worship, serve as reminders of all those who have gone before us.   Their mere existence creates accountability within us to honor and reflect on the lives that inhabited its space.  What were their names?  What hardships or victories did they experience?  What relationships were formed and what influence did these people have in their community?
Midtown Memphis is at risk of losing the Union Ave. United Methodist Church, which anchors our midtown landscape, to CVS Caremark who plans to demolish the building entirely.  For the reasons below, please take action and make this issue more public.

*CVS has signed an agreement with the National Trust for Historical Preservation to never demolish a building that was added on the National Register of Historical Places.  The church was added as recently as 1987, due to its historical significance in its representation of the Classical Revival style of architecture, the engineering, and its period of history in which it was built.
*The community, our neighborhood, does not want this building razed.  There are alternate locations.  We already support the Walgreens pharmacy directly across the street, which employs people from our community.
*Organizations, including a local church, are interested in restoring  the building to function as a place of worship as well as a venue for supporting local artists.
*State County Chancellor Walter Evans has issued a “stay” on progress due to a covenant set forth in a deed that states the building to always be used as a place of worship.
*John Gaisford, one of the prominent architects, wrote a book entitled “How to Build a Church.”  The Board of Church Extension of the Methodist Episcopal Church commissioned the book.  Hubert T. McGhee was the architect who completed the project after Gaisford’s death. Another prominent architect, Hubert T. McGhee, built The Pink Palace Museum in Memphis, which is also on the National Register.
*They claim the building is beyond repair.  Just last fall the seller toured different organizations interested in purchasing the building.  Photos were taken on that tour.  Since it has been under contract with CVS, all media outlets have been denied access.  These photos were taken last fall.
*CVS’s  plan has been rejected by the Land Use and Control Board and the city’s planning staff, citing it fails to meet regulations set forth by the city’s planning staff and the Midtown Overlay Plan.  This was overruled by the City Council.
*Proponents, none of which live in Midtown Memphis, cite the economic impact of the community despite no reports of population increase due to yet another pharmacy in the area.  It will employ 25 people and will pay an average of less than $10.00/ hour with no benefits.

*Malcolm Gladwell, in the New Yorker writes,
"Ram Cnaan, a professor of social work at the University of Pennsylvania, recently estimated the replacement value of the charitable work done by the average American church—that is, the amount of money it would take to equal the time, money, and resources donated to the community by a typical congregation—and found that it came to about a hundred and forty thousand dollars a year. In the city of Philadelphia, for example, that works out to an annual total of two hundred and fifty million dollars' worth of community "good"; on a national scale, the contribution of religious groups to the public welfare is, as Cnaan puts it, "staggering." In the past twenty years, as the enthusiasm for publicly supported welfare has waned, churches have quietly and steadily stepped in to fill the gaps"

You can perform your very own random act of culture today!
If you would like to contribute to the fight to save this historical landmark, you can contribute at Independent Bank in Memphis TN. The fund is listed as Legal Fund UAMC (Union Avenue Methodist Church) account #3011003.  Also, attend the nice, respectful rally this Saturday, Dec. 11th at the corner of Union and Cooper in Midtown. If you have a facebook account, please “like” the Save Union Ave. Methodist Church, Memphis Boycott CVS, and the Midtown Action Coalition.

This is the sad fate of what happened:(  There is now an aesthetically unpleasant CVS building and parking lot.

Posted by Leigh Lucas Gilliland at 12:24 PM No comments: 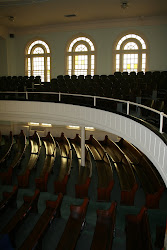